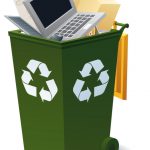 Liquid Technology was recently contacted by an online-based grocery store in New York that was facing a serious problem. The company had been in operation for several years and although its infrastructure had gone through several upgrades, the company had never undergone IT disposition with computer equipment recycling and disposal. This led to the company having multiple storage rooms spread out across several different locations that were filled to the brink with obsolete IT equipment. The collection was largely unorganized and the company’s executives had no idea what this massive […]